Home » Birds » Geese » What Do Wild Geese Eat? (The Answer Might Surprise You) 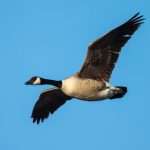 What Do Wild Geese Eat? 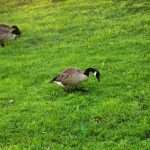 Regardless of the subspecies, all wild geese consume a similar diet; and proper nutrition is as important to geese as it is to humans.

They follow a consistent schedule in their mealtimes, flying to their feeding areas in the mornings and afternoons. In between those two feedings, they are on the water, where they grab blades of aquatic grasses with their beaks and jerk them out of the ground. They also extend their long necks underneath the water and check out the bottom silt for additional plant food.

Altogether, geese need to spend approximately half their day feeding, either on land or on water, in order to satisfy their nutritional needs. They need to feed even more prior to migration, since extra fat reserves are required for the long flight.

The geese also swallow pebbles and gravel to assist in grinding the food and aiding in rapid digestion. This is necessary to support the birds’ high metabolic level, which is critical during flight.

Canada geese are considered herbivores or, essentially, vegetarians. This is why they prefer ponds, marshes and fields in the wild, and city parks, golf courses and lawns in urban or public areas.

During the summer and spring, Canada geese tend to favor the leaves of skunk cabbage, eelgrass and other sedges and grasses. Sedges, which resemble grasses, are actually long, thin blades with microscopic flowers.

Sedges are plentiful with more than 5,500 varieties, making them readily available as food across broad geographical expanses. Waterfowl are most attracted to the seed produced by sedges. Green vegetation takes precedence over agricultural grains during the earlier months of the year.

Like most other wildlife, geese increase the carbohydrates in their diets in the fall and winter. The carbohydrates produce elevated body heat, which helps to protect against the colder temperatures of the season. The adults gravitate toward agricultural grains, berries and barley. The younger birds feed primarily on alfalfa and winter wheat.

Food may become scarce during the later winter, forcing the geese to search farther afield for sources such as the roots and rhizomes of sedges.

Yes, geese do need water – but not just for drinking. Some experts believe water increases the birds’ fertility rate significantly. They also need clean water to flush out their beaks and nostrils on a daily basis and, of course, bathing in clean water helps to keep their feathers in the best and healthiest condition.

What Canada Geese Should Not Eat

Many people find it relaxing to spend a Sunday afternoon at the local park feeding the geese. Unfortunately, it doesn’t take long for the birds to become accomplished beggars, some of them even becoming angry if the food isn’t forthcoming.

One of the main problems is that much of the food given to the geese is, if not harmful, lacking in nutrition. Bread is one of their favorite “treats” and it’s also one of the worst things they can eat. It has absolutely zero nutritional value but, because the birds love its taste, they fill up on it and bypass the things they should eat.

Over time, this can lead to malnutrition, which can open the door for damaging physical problems.

Do not feed similar bread-type products such as chips and crackers. Do not feed scraps or anything spoiled or moldy, since some types of mold can be fatal to waterfowl.

Geese will flock to free hand-outs in large numbers, over-crowding the most popular areas and leading to disease due to too many droppings. Such feeding can also interfere with normal migratory patterns, even eliminating migration in some instances.

The geese become dependent, with no desire to make those long flights and fend for themselves. In these cases, the natural life cycles of the birds become completely disrupted and nature no longer follows its course.

Another problem that can affect generations of geese as a direct result of artificial feeding is that the adults will cease teaching the young geese how to forage. They become accustomed to existing on a welfare program and lose their natural survival instincts.

It is possible to make those park visits positive experiences for the geese as well as for the humans. It boils down to feeding responsibly by cutting bread from the menu, looking for the less-frequented areas to avoid over-crowding and feeding healthy products such as corn (canned, frozen, fresh), pellets, lettuce and other greens, frozen peas (defrosted) and seeds, all in moderation.

There are other foods suggested by wildlife expert Lori Anderson, who also provides a number of valuable feeding tips, including careful observations of birds’ attitudes and behaviors during feeding.

While it may not sound like it, geese are really picky eaters. Seeds were just listed above as appropriate for feeding but, if using wild bird seed, there are certain specifics that must be remembered.

Second, keep in mind the proper method of feeding. It’s suggested that the seed be distributed in small piles over the area, as opposed to scattering it randomly. The piles encourage the birds to search for the food, which is similar to their natural foraging.

Third, don’t toss the seed into the nearby pond. Remember, geese prefer to walk on land and graze. Again, keeping things as natural as possible is a long-term benefit for the birds and their offspring.

Creating a Personal Habitat for Geese

Some people want to get up close and personal with Canada geese, creating a habitat that will attract them to their property as permanent residents. It can be a simple process or it can be elaborate and involved. It just depends on the individual’s preferences.

Second, provide a sense of safety by offering open spaces that allow the geese an unobstructed range of vision. They settle down and feel comfortable as long as they can see and identify any potential threats.

Overall, construct the best, the safest and the most natural environment and they will, indeed, come.

A body of water, even a very small one, makes the setting especially attractive.

Add a wide variety of plants and rigorously avoid the use of insecticides and herbicides on the property.

Surprisingly, geese can do quite well on a diet of nothing but grass provided it’s sufficient in both quantity and quality. This is especially true of fresh Spring grass, which contains all the vitamins and minerals geese need for a nutritious diet. The grass should be kept no higher than three inches.

Of course, that early season grass won’t last forever. When it runs out, simply switch to wheat fed from the bottom of a bucket of water. The wheat sinks to the bottom and the geese can eat without rodents contaminating the food.

Cabbage, cauliflower leaves and lettuce are three favorites of geese. They will also eat different cooked vegetables that may be left over from Sunday dinner, such as carrots and parsnips. Like humans, not all geese like the same things but, also like humans, they often develop an acquired taste for certain foodstuffs.

Always provide fresh drinking water. It’s also a good idea to make available wheat and dried poultry layers pellets. Do not confuse the layers pellets with layers mash. Do not give them the mash since it can ball up in their mouths and prevent swallowing.

Canada geese and their subspecies present a complex story. They are beautiful creatures that, according to the U.S. Fish and Wildlife Service 2013 report, have increased to more than five million breeding geese in North America.

Many of these are resident or non-migratory and some people are beginning to view them as a nuisance. One of the primary contributors to the development of this nuisance perception is the improper, artificial feeding of geese by humans.

As in almost everything else, education is the key. Read. Learn. Become a positive force for these magnificent birds.