Home » Birds » Swans » What Do Swans Eat? (7 Foods To Feed These Beautiful Birds)

Less discussed in all the talk of swans, however, is their diet. What do swans eat, and where do they procure the bulk of their nutrition?

What Do Swans Eat?

As stated above, Swans usually eat on the water. They are primarily herbivores, and will thus feast on all manner of aquatic vegetation. This includes:

However, since there are often smaller animals nearby this vegetation, their diet also consists of small amounts various creatures that may be in the vicinity while they feed, such as:

Interesting to note is that female swans will generally ingest greater quantities of pondweed than males and less waterweed. 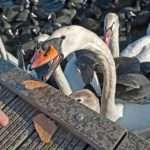 When eating on land, Swans can graze on short-cropped grass, and will sometimes take to potatoes, lettuce, and other field vegetation to supplement their diet.

Normally, swans will eat whenever they need nutrients, during the day. On average, swans weigh anywhere from 20-27 pounds and will eat enough to support their mass and body temperature of 106 degrees. This equates to about 20-25% of their total body weight each day (about 4-7 pounds’ worth of food).

Swans aren’t the type of creature to overeat, so they will graze for a period and return to their trusted food source several times in one day rather than consume one gigantic meal.

Due to their dependence on vegetation, swans must eat more constantly than animals that consume mostly meat. Raw, green vegetation is difficult to digest due to the high amounts of cellulose that it contains. This means the swan must expend more energy to get to and process their food.

Furthermore, they don’t get much in the way of energy out of each bit of food they digest. Since they don’t have particularly large stomachs, they most feed consistently to keep themselves well nourished.

Swans prefer to eat food that is resting on the top of the water, hence their propensity for consuming algae. This is because it takes less energy. Like most animals, they like to conserve as much as they can, and needless consumption of calories, either from searching for food on land or dipping their heads beneath the water, can make it difficult to maintain their ideal body temperature.

If they need to, though, they will use their long necks to delve deep into a body of water to find the plants that they like. This process, known as “upending,” is something that you will most often see them doing when feeding in deeper waters. As their necks reach down to find food, their backsides protrude above the surface of the water as they flail their legs, usually to rather humorous effect.

While comical, this ability lets them reach vegetation that other birds cannot, and allows them to outcompete them for these food sources, which other birds won’t even attempt to eat. When in more ideal, shallow waters, they will simply dabble, or filter feed on the surface of the water, straining what they want from the liquid and leaving the rest to float away.

The swan diet does contain some variation. We already touched on how females will eat more of certain weeds than males. Younger swans are more likely to take in animal matter than older swans. Once a swan hits the adult stage of its life, the amount of animal material that they consume inches ever closer to zero.

Swans don’t change their diet based on the seasons, but for those that like to feed swans, lettuce, potatoes, and other farm vegetables can aid in their nutrition.

In fact, swans that live close to humans, particularly farmlands, will emerge from the water to occasionally raid the fields. These jaunts consist of the swans laying waste to grains and corn. Once they have consumed what they can find strewn about the ground, they will eat the planted crops themselves, much to the consternation of the diligent farmhands who invested time in growing the crops.

They may expand their diets further to include other vegetables, such as carrots, celery, spinach, and celery, in situations where their normal dietary needs are not being met.

Swans need ample amounts of water to survive. They live in freshwater conditions and will mainly consume plenty of freshwater to meet their daily quotas. In dire situations, though, they can consume saltwater. Their bodies will extract limited amounts of salt from their bloodstream, then convert it into a liquid that is excreted from their bills. This is not ideal, however, and they would much rather drink steady supplies of freshwater whenever possible.

Curiously enough, while swans can consume lettuce and do so frequently when given a chance, it is more of an acquired taste for them. Sometimes, warming it up a bit before giving it to them will make them more inclined to give it a try.

For those interested in setting up habitats for swans and feeding them, know that it is possible, but there are a few things to keep in mind:

Swans Need a Large Freshwater Space to Live. Optimum conditions would be an 8-15-acre area of water with about 5 acres of shallow water, though, they can get by with just 5 acres if it is well stocked with the other things they need.

They Protect Their Territory and Children Fiercely. So, they will need room to lay their eggs and be left to themselves. Get too close, and they might attack.

Keep Obstructions to A Minimum. Swans need room to fly around. Too much fencing and other obstacles will impede their movements and make them less likely to want to hang around.

As for what to feed the swans, you already know what they like to eat. Here’s what you should stay away from, however.

Bread. We see people feed bread to birds all the time, and they love the taste. It isn’t necessarily good for them, though. Their digestive tract isn’t cut out for delicious, refined flour and sugar, so feeding bread to a swan is like forcing candy on a baby. Bread has a higher protein count than their natural diet and will disrupt their normal nutrition.

Mature swans who eat too much bread will become weak, and possibly infertile. If they do manage to produce offspring, they are more likely to be born unhealthy. Young swans that eat too much bread will undergo a crippling growth spurt. Once their bodies have grown too big for their legs, they won’t be able to stand or walk around properly.

They might even develop a condition called “angel wing” in which their wings grow incorrectly. Not only will this make them incapable of any kind of flight, it will also make them prone to bullying and ostracization from other swans. Lastly, if you feed them moldy bread, it can kill them.

Chocolate. This will cause a fatal condition called chocolate poisoning. It starts with gastrointestinal distress—vomiting, diarrhea, and the like. It will then progress to affect the central nervous system, resulting in seizures, and ultimately death.

Apples. Though swans can digest apples, the skins can sometimes contain pesticides that are toxic to them. Furthermore, apple seeds contain trace amounts of cyanide that can become injurious for even adult swans.

Onions. Like chocolate, onions can result in a condition that causes gastrointestinal distress. Continued consumption of onions by swans will cause hemolytic anemia, which is shortly followed by respiratory failure and death.

Anything with Salt. While it is true that swans can regulate their salt levels to a degree, too much salt will cause dehydration, kidney failure, and, you guessed it, death. Keep salty foods away from these birds.

Swans are majestic birds that also have a bit of a mean streak. They feed mostly on plants, but will accidentally eat insects and other animals as they scrounge for the aquatic weeds they are used to foraging on. They frequently eat to maintain their ideal body weight (20-27 pounds) and temperature (106 degrees).

Their long necks allow them to reach food near the bottom of different bodies of water that other birds can’t get to, but the prefer to skim the top whenever they can.

They will sometimes come onto land to eat food planted by humans, but this is not their normal, natural diet. They drink freshwater but will consume saltwater in small amounts when times get tough. Though it is possible to set up an outdoor area welcoming to swans, you should refrain from feeding them. If you feel that you must feed them, stay within the limitations of their natural diet.

Swans are creatures deserving of your respect, so make sure you treat them with the utmost caution and care. If you’d like to learn more, start with some scientific literature about swans and their ideal habitats, and perhaps branch out into a few specific books written about swan behavior and psychology.