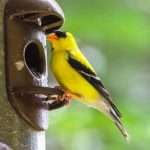 Goldfinches are rather drab in the winter, a dull green/brown with little to no colorful ornamentation.  That shifts dramatically in the spring, however, when the male must begin concentrating on attracting a lady. The “men” turn into quick-change artists, donning bright yellow feathers, black and white wings and a black cap. That, combined with its melodious song, is definitely enough to turn the girls’ heads. END_OF_DOCUMENT_TOKEN_TO_BE_REPLACED